Henri Matisse was an influential artist of the twentieth-century, best known for being an exponent of the Fauvist style.

Henri Matisse was one the most famous painter of the 20th century, but he also worked on sculptures and printmaker. His colorful and bright works brought him notoriety as one of the Fauves, and until the end of his career he pursued the expressiveness of colour by representing flattened forms and domestic environments. 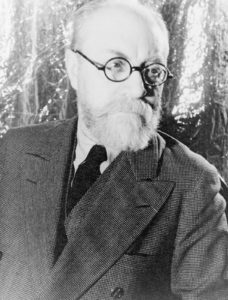 Born in Le Cateau-Cambrésis, in France, he was raised by a wealthy family of grain merchants; in 1887 he moved to Paris to study law, and then, after a period of convalescence during which his mother brought him art supplies, he discovered “a kind of paradise” and became an artist. In 1891, he returned to Paris to study art at the Académie Julian and became a student of William-Adolphe and Gustave Moreau. Initially he painted still lifes and landscapes in a traditional style, but in 1891 he discovered Impressionism thanks to the Australian painter John Russell, who introduced him to Vincent van Gogh‘ art. From that moment on Matisse’s style changed completely, abandoning his earth-coloured palette for bright colours. After studying Turner‘ s works, in 1999 he went back to Paris and met Albert Marquet,  André Derain, Jean Puy and Jules Flandrin, starting with them the Fauvist movement.

The period with the Fauves and after

In 1905 the Fauves exhibited themselves for the first time in the Salon d’Automne, and so Matisse’s first Fauvist work was born: Woman with the hat. The critics were harsh on them, especially on Matisse’s work which was described as “a pot full of colors casted on the public”. Even though the movement of the Fauves ended early, this didn’t affect Matisse’s career; many of his most famous works were in fact created in between 1906 and 1917, when he was an active part of the great gathering of artistic talent in Montparnasse, even though he did not quite fit in. Matisse travelled from Africa to Russia studying different style, this changed his works as well, as we can see in the new way of using colors: black and a new boldness in the use of intense, unmodulated colour were introduced.

What inspired him and the Fauves?

Matisse thought that the artist can’t control colors or forms, he must be guided by his primordial instincts to create a work of art. That’s why in his works figures are distorted, he has to create a sense of harmony in his paintings, and harmony can be accomplished with both space and color: complementary colors create great contrast, and contrast is used to show deep lights and shadows, making images of big impact.

In 1941 he was diagnosed with an abdominal cancer that limited his movements, but despite his illness he kept working by designing cuts-out. At last, he organized the decoration of Chapelle du Rosaire de Vence which allowed him to expand this technique within a truly decorative context.

Matisse died of a heart attack at the age of 84 on 3 November 1954. He is interred in the cemetery of the Monastère Notre Dame de Cimiez, near Nice.

You can see previous posts from here => Iron Age Tools