House VI is an iconic building designed by Peter Eisenman. His second built work  has become famous for both its revolutionary deconstructivist definition of a house as much as for the physical problems of design and difficulty of use.

At the time of construction, the architect was known almost exclusively as a theorist and “paper architect,” promulgating a highly formalist approach to architecture he calls “postfunctionalism.” Rather than form following function or an aesthetic design, the design emerged from a conceptual process, and remains pinned to that conceptual framework.

As an architect, he is best known for his fragmentary designs most closely aligned with the Deconstructivist movement. Eisenman is interested in the way humans perceive space. He insists that through a manipulation of size, shape, and form an architect can alter the way in which one conceptualizes experience. Eisenman’s architectural constructions attempt to explore this notion. Eisenman has designed a number of structures throughout the world, including Il Giardino dei Passi Perduti, Castelvecchio Museum in Verona, Italy; the Memorial to the Murdered Jews of Europe in Berlin, Germany.

The house, which is also known as the Frank Residence, was built in the early 1970s, while the schoolhouse dates back to 1865, the Civil War era. The property owners, Suzanne and Richard Frank, commissioned construction of the residence and also the renovation and expansion of the schoolhouse. The couple, who lived and continue to maintain a residence in New York City, wanted a getaway place of their own in the country.

Mrs. Frank, who was employed by Mr. Eisenman at the Institute for Architecture and Urban Studies in Manhattan at the time, said they showed him the property and asked him what it would cost to tackle the school house. Mr. Eisenman was one of what was termed “the New York Five”—including Michael Graves, Charles Gwathmey, John Heiduk, and Richard Meier; architects of reputation that took hold in the late 1960s. Mrs. Frank said she jumped at the opportunity to have a house designed by him, as she really liked the residence known as House I, which he built for a client in New Jersey. The Franks’ 1,500-square-foot, one-bedroom residence took longer to build than they expected and cost twice as much as the original estimate, according to Mr. Frank. 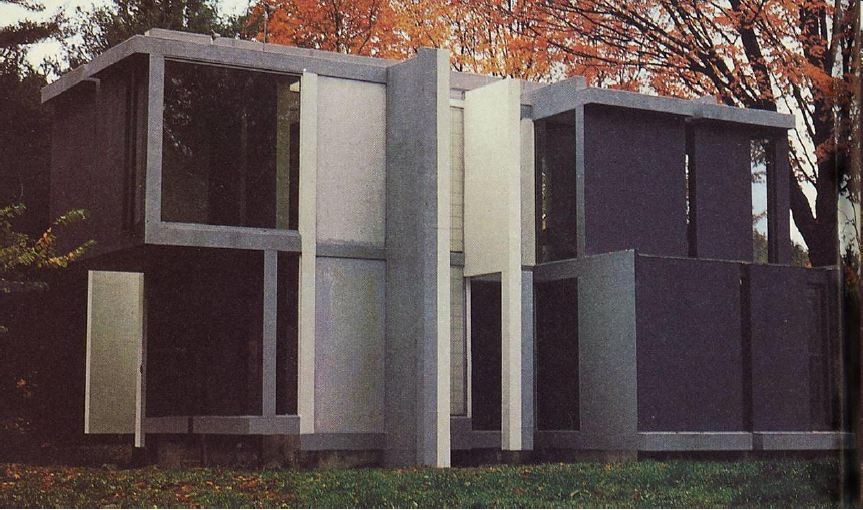 “We were very much part of the process,” his wife said, pointing out that they were on the property a considerable part of the construction period (1972 to 1975) and lived in the schoolhouse, which now serves as a guest house and a study and studio space for Mrs. Frank, an author and architectural historian.

Their house in is the end product of a conceptual process in progress, as Mr. Eisenman was known to be a theorist. Mr. Eisenman, who is described as “one of the founding theorists of postmodern architecture,” said, “To theorize about your work means your work contains an idea. … The only architects worth their salt have in fact theorized in some way or another about their work.” House VI has been greatly parsed, and its success debated, over the ensuing decades, with many visitors, including renowned architects, coming to experience it in situ, the Franks noted. Mrs. Frank, in a written communication, said, “The most prominent architects who I can remember hosting were Frank Gehry, Philip Johnson, Kenneth Frampton and Laurie Hawkinson and Henry Smith-Miller. 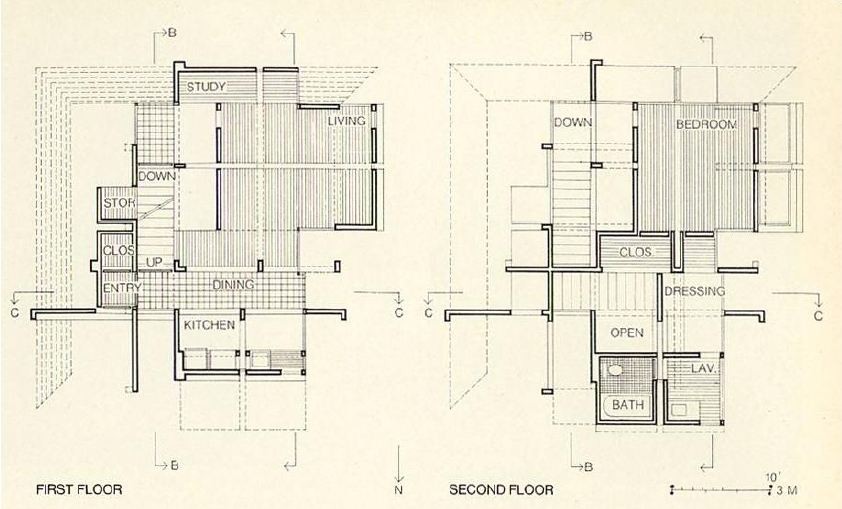 Starting from House I, Peter Eisenman’s early works are mostly residential housings. Those housings are characterized by geometrical design as they are started from a cube with vertical and horizontal grid. This shows the influence of Purism in Le Corbusier and Giuseppe Terragni’s architecture.

When you get inside of the house, there are two colored stairs one of which is upside down, and columns penetrate walls or floors and even float in the mid air. These Non-functional composition plays a role as a reminder of an architectural process. However, the unconventional and non-functional design requires the users to get accustomed to it. House VI is not an object in the traditional sense – that is, the result of a process – but more accurately a record of a process. 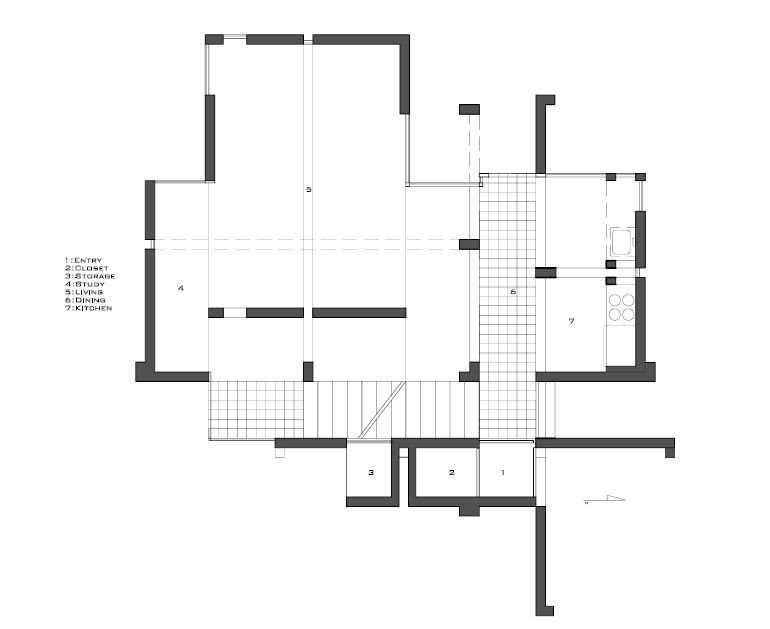 Like the set of diagrammed transformations on which its design is based, the house is a series of lm stills compressed in time and space. Thus, the process itself becomes an object; not an object as an aesthetic experience or a series of iconic meanings, but an exploration into the range of potential manipulations latent in the nature of architecture, unavailable to us because they are obscured by cultural preconceptions.

The house was effeciently constructed using a simple post and beam system. However some columns or beams play no structural role and are incorporated to enhance the conceptual design. For example one column in the kitchen hovers over the kitchen table, not even touching the ground! In other spaces, beams meet but do not intersect, creating a cluster of supports. Robert Gutman wrote on the house saying, “most of these columns have no role in supporting the building planes, but are there, like the planes and the slits in the walls and ceilings that represent planes, to mark the geometry and rhythm of Eisenman’s notational system.”

The structure was incorporated into Eisenman’s grid to convey the module that created the interior spaces with a series of planes that slipped through each other. Purposely ignoring the idea of form following function, Eisenman created spaces that were quirky and well-lit, but rather unconventional to live with. He made it difficult for the users so that they would have to grow accustom to the architecture and constantly be aware of it. For instance, in the bedroom there is a glass slot in the center of the wall continuing through the floor that divides the room in half, forcing there to be separate beds on either side of the room so that the couple was forced to sleep apart from each other.

Another curious aspect is an upside down staircase, the element which portrays the axis of the house and is painted red to draw attention. There are also many other difficult aspects that disrupt conventional living, such as the column hanging over the dinner table that separates diners and the single bathroom that is only accessible through a bedroom.

As annoying as the house was to inhabit, Eisenman was able to constantly remind the users of the architecture around them and how it affects their lives. He succeeded in building a structure that functioned both as a house and a work of art, but changing the priority of both so that function followed the art. He built a home where man was forced to live in a work of art, a sculpture, and according to the clients who enjoyed inhabiting Eisenman’s artwork and poetry, the house was very successful. 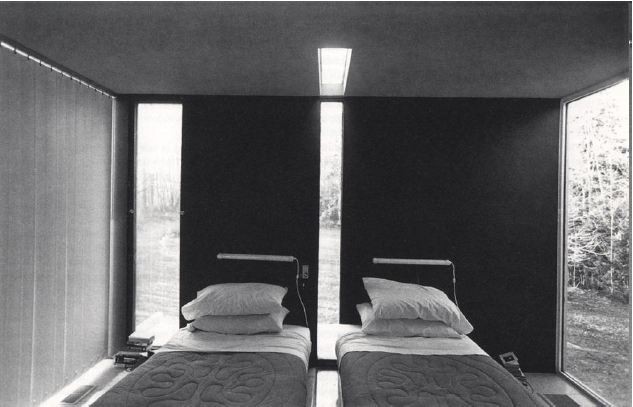 The building is meant to be a “record of design process,” where the structure that results is the methodical manipulation of a grid. To start, Eisenman created a form from the intersection of four planes, subsequently manipulating the structures again and again, until coherent spaces began to emerge. In this way, the fragmented slabs and columns lack a traditional purpose, or even a conventional modernist one. The envelope and structure of the building are just a manifestation of the changed elements of the original four slabs, with some limited modifications. The purely conceptual design meant that the architecture is strictly plastic, bearing no relationship to construction techniques or purely ornamental form.