Joseph Maria Olbrich was a leading architect of the Austrian Art Nouveau and one of the founders of the Vienna Secession. 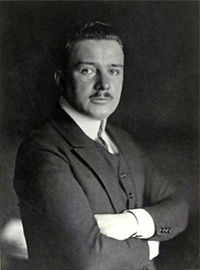 Born in Opava, in Austrian Silesia (now part of the Czech Republic), Joseph Maria Olbrich studied architecture at the Wiener Staatsgewerbeschule and afterward at the Academy of Fine Arts in Vienna under Otto Wagner.

Along with Koloman Moser, Josef Hoffmann, Otto Wagner, and Gustav Klimt, Olbrich was a founding member of the “Viennese Secession” (1897), a group of dissenting artists who split off in protest against the academy art scene as other late 19th-century secessionist artists had already done in Berlin (1892) and Munich (1893).

Influenced by the Viennese architect Otto Wagner (1841-1918), Olbrich was also associated with Art Nouveau, known in Austria as Sezessionstil or by its German name of Jugendstil, and was involved in the decorative design which is promoted. But he managed to overcome the weaknesses and limitations of Art Nouveau architecture, combining its fantastic appearance with spatial and distribution functionality.

A colony of artists originated in Darmstadt around 1900 with the support of the Grand Duke of Hesse Ernst Ludwig von Hesse. He tried to implement this Crafts Guild idea, which was pursued by Victorians such as Ruskin and Morris, creating a village studio that included studio apartments, a workshop school, and his residence. The goal of the colony was to contribute to the economic growth of the region through the presence of the most important German-speaking artists, whose work is presented to the public in a series of exhibitions. Olbrich designed six houses here, as well as a central meeting and study hall, which bears witness to the influence of Scottish architect Charles Rennie Mackintosh.