Marquetry is the art of creating decorative designs and pictures by skillfully utilizing the grain, figure and colors of thin veneers and sometimes other materials such as shell or ivory.

Marquetry is the art of inlaying different woods, and other natural materials to create a picture. To inlay is to set a material onto another surface, but recessed in so that inlayed material is at the same level as the surface. Most of the time the inlayed material is wood but it could be ivory, mother-of-pearl, tortoise shells, bark, straw, stone, metal, gems. All the peculiarities, grain, knots, defects. Are used in the overall effect of the picture. Marquetry is often found on the finest furniture. It has been around for thousands of years, and today is considered something of a dying art.

Marquetry depending on how one defines was practiced in Egyptian and Roman times. Pierre Ramond says that King Mausole was the first to use it in his palace in 350 BC. It was widely use for the rich in the 17th , 18th, and 19th centuries in Europe.

When was veneered marquetry invented and diffused ?

The technique of veneered marquetry had its inspiration in 16th century Florence. Marquetry elaborated upon Florentine techniques of inlaying solid marble slabs with designs formed of fitted marbles, jaspers and semi-precious stones. This work, called opere di commessi, has medieval parallels in Central Italian “Cosmati”-work of inlaid marble floors, altars and columns. In Florence, the Chapel of the Medici at San Lorenzo is completely covered in a colored marble facing using this demanding jig-sawn technique.

Techniques of wood marquetry were developed in Antwerp and other Flemish centers of luxury cabinet-making during the early 16th century. The craft was imported full-blown to France after the mid-seventeenth century, to create furniture of unprecedented luxury being made at the royal manufactory of the Gobelins, charged with providing furnishings to decorate Versailles and the other royal residences of Louis XIV. Early masters of French marquetry were the Fleming Pierre Golle and his son-in-law, André-Charles Boulle, who founded a dynasty of royal and Parisian cabinet-makers (ébénistes) and gave his name to a technique of marquetry employing tortoiseshell and brass with pewter in arabesque or intricately foliate designs. Boulle marquetry dropped out of favor in the 1720s, but was revived in the 1780s. Floral marquetry came into favor in Parisian furniture in the 1750s, employed by cabinet-makers like Bernard van Risenbergh, Jean-Pierre Latz and Simon-François Oeben. The most famous royal French furniture veneered with marquetry are the pieces delivered by Jean Henri Riesener in the 1770s and 1780s. The Bureau du Roi was the most famous amongst these famous masterpieces.

In 1672, Boulle rose from master cabinetmaker to ébéniste du roi, royal cabinetmaker and sculptor to King Louis XIV, known as the “Sun King.” That same year, the king granted him the royal privilege of lodging in the Palais du Louvre. This position allowed Boulle to produce furniture as well as works in gilt bronze, such as chandeliers, wall lights, and mounts for furniture. Although strict guild rules usually prevented craftsmen from practicing two professions simultaneously, Boulle’s favored position allowed him protected status and exempted him from these statutes. Boulle’s specialty was wood pictorial marquetry, and he was so skilled he became known as a “painter in wood.”

What is The Bureau du Roi?

The Bureau du Roi, also known as Louis XV’s roll-top secretary, is the richly ornamented royal cylinder desk which was constructed at the end of Louis XV’s reign.

The Bureau du Roi was probably started in 1760, when the commission was formally announced. Its first designer was Jean-François Oeben, the master cabinet maker of the royal arsenal. The first step in its construction was the fabrication of an extremely detailed miniature model in wax. The full scale desk was finished in 1769 by his successor, Jean Henri Riesener, who had married Oeben’s widow. Made for the new Cabinet du Roi at the Palace of Versailles, it was transferred to the Louvre Museum in Paris after the French Revolution, but has been returned to the Palace of Versailles in the 20th century where it stands again in the room where it was standing before the Revolution. Secret diplomatic papers were kept inside the secretary’s secret drawers. 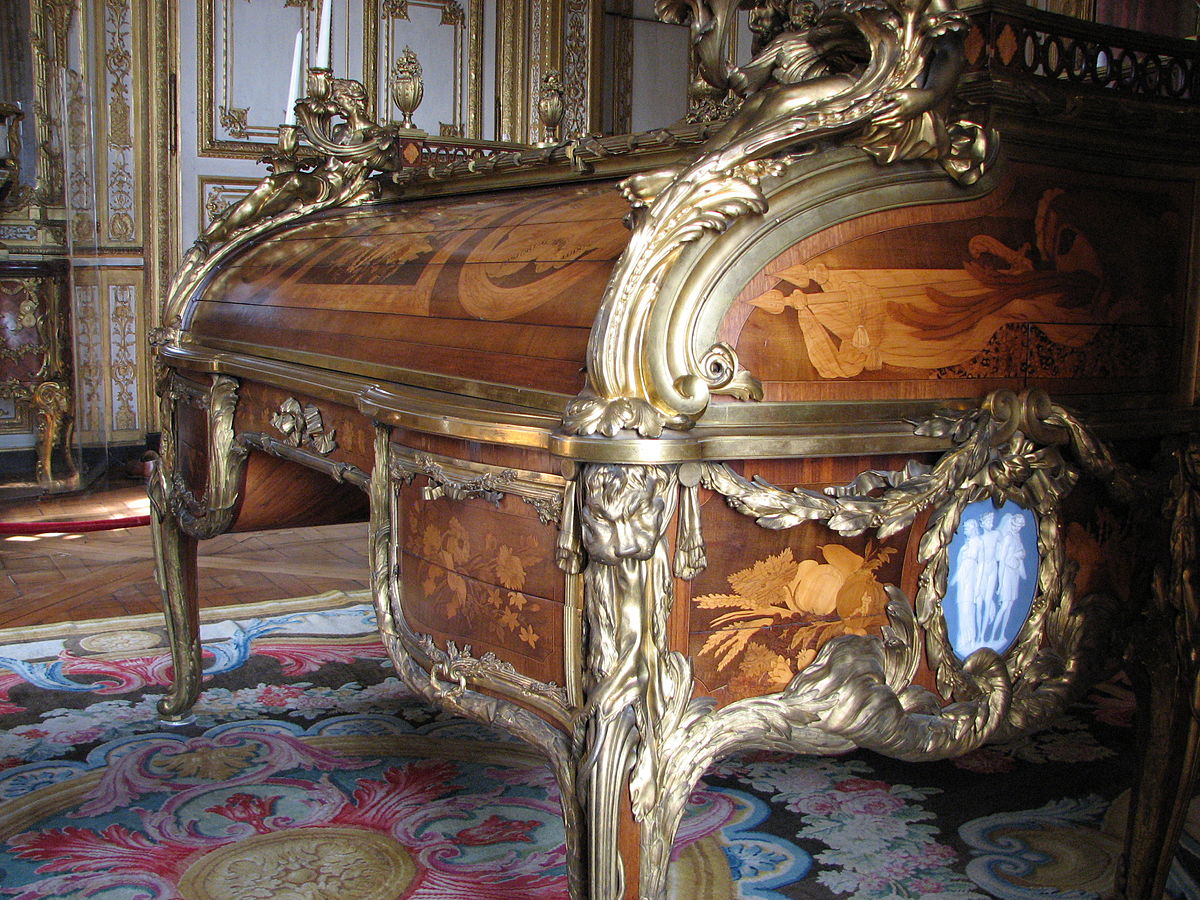 The desk is covered with intricate marquetry of a wide variety of fine woods. In an oval reserve at the center of its ‘public’ side, away from the king himself, is the marquetry head of Silence, with forefinger to lips, a reminder of the discretion required in the king’s business. Gilt-bronze moldings of plaques, statuettes, miniature busts and vases, even integral scrolling gilt-bronze candle stands, further adorn the surfaces of the desk. The original design was to have a miniature bust of Louis XV on top, but it was replaced by Minerva after his death in 1770.

Who was Jean-François Oeben?

Oeben was born in Germany but emigrated to Paris in the 1740s. After marrying the sister of another ébéniste, he was given the prestigious title of ébéniste du roi (cabinetmaker to the king) in 1754, and obtained lodgings and a workshop at the Gobelins Manufactories. He later was stationed at the Arsenal in Paris, where he was granted permission to build a forge to cast his own metal fittings.
Oeben soon specialized in small, elaborately fitted, multi-purpose pieces of furniture with mechanical parts. He is also credited with having reintroduced naturalistic floral marquetry, which had fallen out of fashion. He produced furniture for the most fashionable members of the aristocracy and was patronized by Madame de Pompadour, Louis XV’s mistress. Oeben executed his work with considerable artistic taste and was an innovator in the use of intricate compositions, which is evident in the Getty Museum’s Writing and Toilette Table, from about 1754.