Nowadays we are used to take advantage of computers, ignoring why this machine was invented and being unaware of functioning. Through this post we want to try to give answers to some of these questions.

People mistakenly think the word “Computer” is a fairly recent term, at least belonging to our century, but surprisingly, it turns out that this term dates back to 1646 and precisely appears for the first time in a writing by Sir Thomas Browne that defines “Computers” people involved in the counting of time through the formulation of calendars.

The history of the Personal Computer, of that device that now we can found in every house, bases its philosophy on the “concept of Neumann”, conceived by John von Neumann in 1940. This scientist sensed the possibility of creating a machine in which “the program is stored” in the machine itself, paving the way for the development of the modern computer started with ENIAC. This was the name of the first electronic computer, a gigantic system built in 1946 and which, with its 18,000 valves, occupied a space equal to a large gym and is still unsurpassed in physical dimensions. The ENIAC had a computing power thousands of times lower than that of any modest Personal Computer today.

When all started. Waht were the minds that made a greater contributionto this invention?

The history of Personal computers as we know them starts in the 70s. Manufacturers of basic components such as RAM, CPU, interface chips used in these early personal computers, did not even remotely think that their components designed for industrial applications were giving rise to one of the world’s largest industries by a little group of young passionate and courageous people who knew how to use the same components in another way.

Among these young people there were Bill Gates (1), Steve Jobs (2) and some very important others, less known today, but then just as fundamental for this development. Companies such as Intel, AMD, Texas Instruments, Motorola and IBM itself were looking at these guys and their initiatives with detachment and a little pity.

Once the importance is understood, the large and diversified Japanese industries face strongly on the market of basic components. Prices collapse, the PC industry takes advantage of the fact that the cost of its raw material decreases more and more. After various political skirmishes, the US and Japan agree on the famous Fair Trade Value, which basically meant an agreement that set a minimum price for US semiconductor exports.

1981, a year that rappresents the turning point for the birth of personal computers as we konw them. 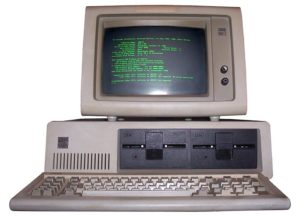 In July 1981 the era of modern PC begins: the first IBM PC leaves the production line and is announced to the public in August under the acronym PC 5150. This product had not required any substantial technological investment, which had been put together in record time by a small group of young technicians in a distant and small IBM division in Florida, but that marked the beginning of a century-long revolution for the Computer. The IBM PC was not just a product but a catalyst for an entire industry that has now reached global dimensions. The PC then, this industrial atomic bomb, explodes in 1981 and its shock waves who knows for how many decades they will still feel. Much of the PC design was influenced by the DataMaster. The screen and keyboard were integrated into one unit. Because these functions were limiting, they became external drives on the PC.

During the years PC industries has developed and diversified. New brands joined the others and they svilupped a very tight competition.

At the beginning, the Personal Computer had to be simply a tool for the optimization of the production process and for the analysis of different studies. Even today, obviously, this factor persists, but the latest technological innovations have opened up boundless work spaces, such as those related to 3D modeling, or video making, just to name a few. Even its appearance over the years has changed radically, if before the aesthetic component could be ignored, today it is not. Each manufacturer wants to devise a product that is more powerful and performant but also more beautiful and manageable compared to direct contenders. PCs have become thinner and considerably smaller, the materials used are valuable and serve to capture the eyes of users, these machines have become real objects of design, almost a status symbol.

After 30 years the PC continues to grow and prosper. With deep industry support and a constantly evolving architecture, PC systems will continue to dominate the personal computer market for the foreseeable future.