Ludwig Mies van der Rohe designed the pavilion on behalf of the German Government for the 1929 World Exhibition in Barcelona. It was made in collaboration with Lilly Reich, who was the creative director of the German building section.

On an especially selected parcel of land, Mies fulfilled an only vaguely formulated architectural assignment, by constructing a flat-roofed representational building with a “free floor plan”, that is, a series of flexible spaces with flowing transitions from one room to the next. The use of only the finest materials such as onyx doré, green marble and travertine, combined with large glass façades that “floated” in a steel skeleton construction, gave the pavilion its characteristic transparency and spaciousness.

The absence of traditional national emotive themes contributed substantially to the pavilion’s positive impact and increased the building’s acceptance among the visitors and hosts of the World Exhibition. Even decades after it was torn down, the significance of the once ephemeral structure was undisputable.

Mies was offered the commission for the building in 1928 after his successful administration of the 1927 Werkbund exhibition in Stuttgart. The German Republic entrusted Mies with the artistic management and creation of not only the Barcelona Pavilion, but for all buildings of the German sections at the 1929 International Exhibition. However, Mies ran into severe time constraints, as he had to design the Barcelona Pavilion in less than a year, while having also to deal with unstable finances. 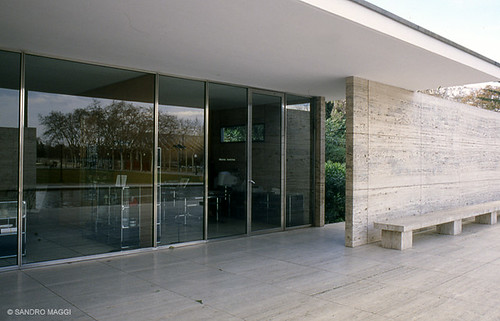 In the years following World War I, Germany began a turnaround, due to the economical recovery started by the 1924 Dawes Plan. The pavilion for the International Exhibition was supposed to represent the new Weimar Germany: democratic, culturally progressive, prospering, and thoroughly pacifist; a self-portrait through architecture.

It should give voice to the spirit of a new era

This concept was carried out with the realization of the “Free plan” and the “Floating roof” key elements.

The pavilion’s design is based on a formulaic grid system developed by Mies, serving not only as the pattern for the travertine pavers, but it also as an underlying framework for the wall systems to work within.  By raising the pavilion on a plinth in conjunction with the narrow profile of the site, the Barcelona Pavilion has a low horizontal orientation that is accentuated by the low flat roof, appearing as to float over both the interior as well as the exterior.

The low stature of the building narrows the visitor’s line of sight forcing one to adjust to the vision framed by Mies.  The interior of the pavilion consists of offset walls that work with the low roof plane to encourage movement, as well as activate Mies’ architectural promenade, where framed views would induce movement through the narrow passage that would open into a larger volume. This cyclical process of moving throughout the pavilion sets in motion a process of discovery and rediscovery during one’s experience; always offering new perspectives and details that were previously unseen.

One of the most important aspects of the pavilion is the roof.  Its low profile appears in elevation as a floating plane above the interior volume: the appearance of floating gives the volume a sense of weightlessness that fluctuates between enclosure and canopy. The roof structure is supported by eight slender cruciform columns that allow it to (apparently) effortlessly floating above the volume, while freeing up the interior to allow for an open plan.  With the low roof projecting out over the exterior and the openness of the pavilion, there is a blurred spatial demarcation, where the interior becomes  exterior and exterior becomes interior. 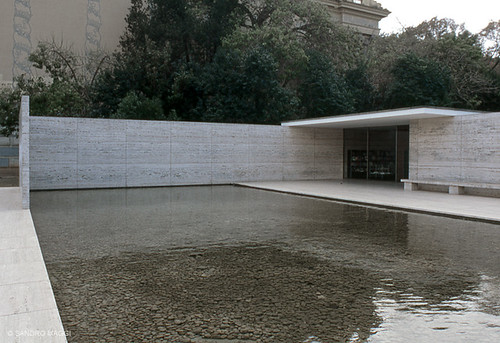 The pavilion is designed as a proportional composition where the interior of the pavilion is juxtaposed to two reflecting pools. The smaller pool is located directly behind the interior space, allowing for the light to filter through the interior volume as well illuminate the marble and travertine pavers.

For more than half a century, the “Barcelona Pavilion” coloured the imagination of modern architects worldwide. Here was one of the most enticing, beautiful and refined buildings of all time, and yet it had stood for no more than a few months before it was pulled down.

Even so, this was enough to inspire imperfect lookalike designs over several decades in the guise of new houses and art galleries. This beautiful pavilion, with its geometric arrangement of shimmering glass and marble planes,  had been so short lived for it was meant to be nothing more, if nothing less, than a temporary exhibition space.

As we already said, it was commissioned by the Weimar Republic; and its job was to advertise a new, progressive, democratic and modern Germany; as such, this vision of the future was no starkly functional “machine for living”: it was a manifesto for the rising glory of a new nation, from the ashes of its, at the time, darkest hour. As of this, the German Pavilion was realised in rich and stunning materials: four shades of tinted glass, along with marble, onyx, chromed steel and travertine. Walking through the pavilion, with reflections of sun-dappled water playing on the underside of the roof, and breezes wafting through open walls, it was hard to tell interior from exterior. It had to be built quickly, as expected of an exhibition stand, and yet the quality of the materials Mies chose meant that the German Pavilion looked as if it would last for decades rather than months.

This dreamlike atmosphere was reinforced by the fact that there was nothing to see inside beyond the architecture itself, save for a single sculpture of a female nude – Alba, or Dawn, by the German artist George Kolbe – and the architect’s new leather and chrome steel Barcelona chairs. While other nations worked hard to show off their heritage through rich and eclectic displays of art and design, Weimar Germany chose to represent itself through this minimalist and ethereal pavilion alone.

The Barcelona Pavilion, an emblematic work of the Modern Movement, has been exhaustively studied and interpreted, having inspired the oeuvre of several generations of architects. After the closure of the Exhibition, the Pavilion was disassembled in 1930. As time went by, it became a key point of reference not only in Mies van der Rohe’s own career but also in twentieth-century architecture as a whole.

In 1980 Oriol Bohigas, head of the Urban Planning Department at the Barcelona City Council, set the project in motion, charging architects Ignasi de Solà-Morales, Cristian Cirici and Fernando Ramos to research, design and supervise the reconstruction of the Pavilion. Work began in 1983 and the new building was opened on its original site in 1986.

Glass, steel and four different kinds of stone (Roman travertine, green Alpine marble, ancient green marble from Greece and golden onyx from the Atlas Mountains) were used for the reconstruction, mirroring the same characteristics andorigin of the ones originally employed by Mies in 1929.

Since the Pavilion’s reconstruction in the 1980s, the Mies van der Rohe Foundation has invited leading artists and architects to temporarily alter the Pavilion. These installations and alterations, called “interventions”, have kept the pavilion as a center of debate on architectural ideas and practices.