Toyo Ito is a Japanese architect known for creating conceptual architecture in which he seeks to simultaneously express the physical and virtual worlds.

Ito was born in Japanese-occupied Korea to Japanese parents. He went to Japan with his mother and sisters in 1943, and his father moved back there a few years later. Ito studied architecture at the University of Tokyo. After graduating (1965), he apprenticed with Kikutake Kiyonori, one of the leaders of the Metabolist school, a Japanese architectural movement of the 1960s that advocated a radically futuristic approach to design. As the Metabolist movement wound down, Ito left Kikutake’s firm, and in 1971 he established his own practice, Urban Robot (URBOT), in Tokyo, initially focusing on residential and other small-scale projects.

What is Toyo Ito’s vision?

It is often said that Ito’s work has affinity with the ideas of philosophers such as Munesuke Mita and Gilles Deleuze. Ito defined architecture as “clothing” for city dwellers, especially in the contemporary Japanese metropolis. This theme revolves around the balance between private life and the “public” metropolitan life of an individual. The current architecture of Toyo Ito expands his work produced during the postmodern period, aggressively exploring the potentials of new forms. In doing so, try to find new spatial conditions that manifest the philosophy of beings without frontiers.

He has received numerous international awards, including in 2010, the 22nd Praemium Imperiale in Honor of Prince Takamatsu; in 2006, The Royal Institute of British Architects’ Royal Gold Medal; and in 2002, the Golden Lion for Lifetime Achievement for the 8th Venice Biennale International Exhibition.

What are the most important works of Toyo Ito? 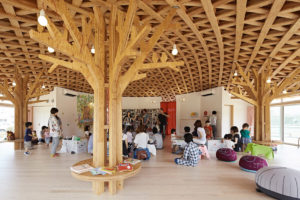 A tandem of the architectural projects. Steel Hut is a hybrid of the tetrahedron, octahedron, and other geometrical figures. The combination of transparent and perforated screens represents the intrinsic lightness of the Japanese architecture, but is subjective in interpretation.

The two buildings are linked by a common atrium. The hotel is contained in a distorted cylinder, expanding towards the top and clad in red metal panels.The office building is a rectangular volume with a glass curtain wall and red motif running through the centre.

This is the place to read, engage in discussions, relax or just have a cup of coffee. The particular feature of the ground floor is that has no walls. 166 arches are built in a quadrilateral, allowing the natural scenery to live in the interior.

On the outside, the building resembles a large glass aquarium, where instead of fish there are libraries, cinema, studio and exhibition space stand. Algae grow through the floors in the form of asymmetrical tube. Being very naughty, they change direction, increase and decrease in diameter.

The design for the house began as an L-shape, with Ito’s sister expressing a desire for a visual connection between different parts of the house. However, as the discussion progressed the design began to focus increasingly on the symbolic nature of what the house meant to the grieving family. This lead to the introverted, U-shaped design which separated the domain of the family from the outside world. 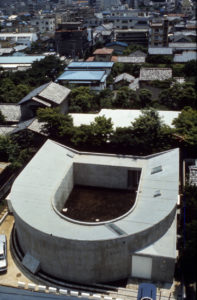 The internal layout of the building consists of the long curved corridor, which terminates at each end in bedrooms: at one end the mother’s, at the other the daughters’. These ends of the corridor are dark, with the primary light source being the entrance to the internal courtyard, near the center of the bend – at the symbolic meeting point of the family. The surfaces inside are all white, making a minimalist space for contemplative thought.

From the algorithm of the double helix, there arises a unique form of Nature. Toyo Ito has been inspired by this particular shape to design furniture that facilitates connection among people and that allows free use of spaces. The result is a bench with vegetal silhouette, similar to the fragments of a plant, with which we can compose a full leaf. 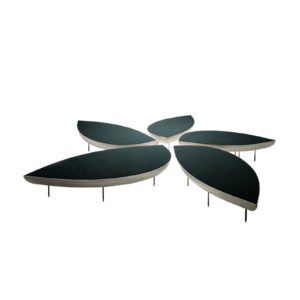 By combining the pieces of the series in different ways, we alter the rhythms. Changing the position or orientation of the benches, we can modify the context and adapt to the dimensions of any space. Toyo Ito uses natural, quality materials: wool, wood and steel to enhance the organic component of the design. Konoha is a Japanese word that means tree leaves. In a garden we find leaves, benches and sculptures all these, in one, is Konoha. 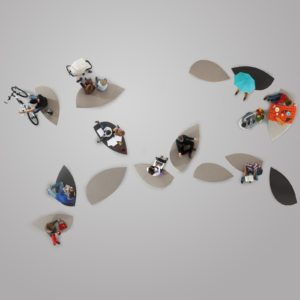 Produced by Japanese brand Yamagiwa, the Mayuhana lamp was first launched in 2007 and features a triple skin of delicate fibre mesh balls.

Mu, which means “hexagon” in Japanese, was designed to complement the Ku crockery collection he created for Alessi in 2006.Each piece of stainless steel cutlery has a slim handle that finishes in a hexagonal profile at the tip.

Movement and flexibility summarize the emotional power of Toyo Ito, who in this sculpture-bookcase captures the design essence of Sendai’s media centre (Japan), which he designed and used as inspiration. This leap in scale consists of six light shelves connected through turned elements of solid wood, all different from each other in inclination and section. Sendai is definitely a piece of furniture of silent albeit captivating design, which reflects the typical oriental philosophy of the great architect.