The Iron Age is the final technological and cultural stage in the Stone–Bronze–Iron sequence. During this Age metalworking techniques evolved drastically. Iron, a much more resistant material,  gradually replaced bronze, beginning from the Middle East and reaching southeastern Europe around 1200 BC.

How was the transition from Bronze to Iron Age?

These factors discouraged ancient metallurgists from using iron. However, deprived of tin due to the collapse of trade, those metallurgists began to learn how to work iron. It was then that they made an important discovery.

How men learned to smelt?

There is an ongoing debate to understand how the ancient learned smelt.

It is likely that the first smelting was done by accident by lighting a bonfire over tin or lead ores, accidentally producing a metallic tin and lead, as the melting temperature for these is easily reached. These metals can be remelted and cast to make ornaments, tools, or weapons.

How was Iron Age lifestyle ?

The way of life in the age of bronze improved greatly thanks to housing. The typical building on a settlement would have been the large roundhouse. The mainframe of the roundhouse would have been made of upright timbers, which were interwoven with coppiced wood to make wattle walls. The roof was constructed from large timbers and densely thatched. The main focus of the interior of the house was the central open-hearth fire. This was the heart of the house to provide cooked food, warmth, and light. Given the great importance of the fire, within the domestic sphere, it would have been maintained 24 hours a day.

All of the domestic life would have occurred within the roundhouse. 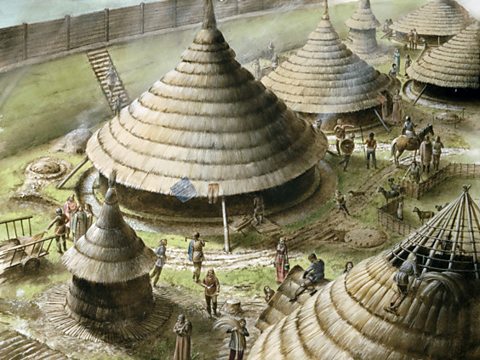 A chronological phase of our society

Like for the other periods of prehistory its chronological limits vary considerably according to geographical and cultural context. Some civilizations never knew the Iron Age, while having a social development and/or considerable technical, such as pre-Columbian civilizations.

Therefore now it tends to indicate Iron Age, not a chronological stage or an evolutionary stage, but the presence of a technique that influenced deeply and durably the cultures of some societies, especially in Europe.