Adolf Loos was an austrian architect, critic, and interior designer. Against the ephemeral decorations of Art Nouveau and dedicated to purity of form, he was a pioneer of modern architecture,  and gave an important intellectual contribution to architecture evolution. 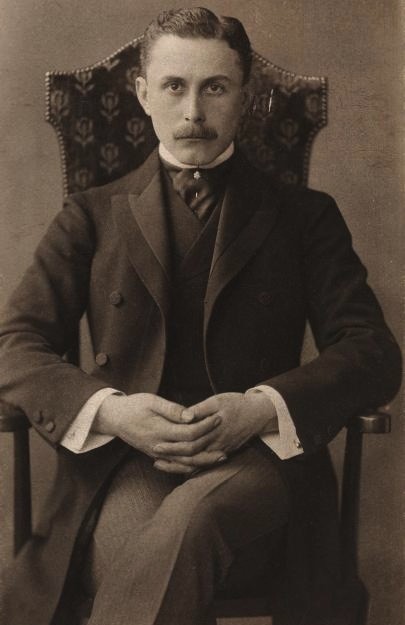 Adolf Loos was an Austrian architect. He is considered one of the precursors of modern architecture. He was born on 10 December 1870 in Brno, in Moravia, a region of central Europe which in recent years belonged to the Austro-Hungarian Empire. Son of a sculptor, he grew up in his father’s workshop among marble blocks and chisels. He completed his studies and in 1893  moved abroad, first to the United States and then to London. In 1896 he returned to his homeland and settled in Vienna. In the early years he devoted himself above all to theoretical architecture and wrote numerous articles in which he set out the guidelines of his thought.

About his architecture work

As an architect, he was very interested in residential architecture. His first project dates back to 1903: the renovation of Villa Karma located in Montreux and characterized by the extreme simplification of the surfaces and the rigorous volumetric study. It is clearly inspired by the style and thought of Otto Wagner, and the partially symmetrical layout, the use of large surfaces of clear roofs, which contrast with the Doric order that marks the main entrance, are proof of this.

In 1910 Adolf Loos created the Villa Steiner and the house on Michaelerplatz in Vienna called “(das) Haus ohne Augenbrauen”, (house without eyebrows) for the clean and unadorned style. In 1912 he designed the Scheu House, also located in Vienna, one of the first to use a flat roof terrace. In the design of these houses Loos invents the Raumplan, a spatial solution in which rooms have different heights depending on function, and therefore the relationship between different volumes suggests different heights. Le Corbusier will take up this idea in some of his most famous architecture projects.

Since 1900 Loos proves to be hostile towards the Secession, the Austrian branch of Art Nouveau, and in particular towards the ornament, so heavily promoted by the secessionists.

It must be considered that Loos’s fundamental argument against the use of ornament was based not only on the waste of time and material caused by the decoration, nor was it a purely formal characteristic for him. According to the architect, ornament was a form of slavery of practice, exercised by the designer on the craftsman to stage the nostalgia of the past that hides the true forms of modernity.

To bare and sparse facades he opposed opulent and decorative interiors, seeming to contradict the rational principles he supported. Indeed he does not rejected the ornament when it was an intrinsic characteristic to the material, able to withstand time and fashion. In the interiors, like Mies van der Rohe, he used plenty of semi-precious materials such as wood, metal and marble. His aversion to the ornament was not purely aesthetic, but primarily rational, against the ephemeral and the frivolous.

His architecture carries evocative symbolic interpretations demonstrating a keen attention to the territorial and human context and this is the reason why his masterpieces are the small private houses.

In the writings of Adolf Loos, more and more attention was paid to what he  considered an overkill of decor both in traditional Viennese design and in later products of the Vienna Secession and the Vienna Workshop. In 1898, in the pages of Ver Sacrum, the organ of the Vienna Secession, Adolph Loos published an essay that marked the beginning of a long theoretical opposition to the then popular art-neo movement. His theories culminated in a short essay titled “Ornaments and Crime,” published in 1908. Thanks to this writing, Loos will later be considered one of the founders of European Rationalism.

For Adolf Loos, the lack of ornamentation in architecture was a sign of spiritual strength. The essay quickly became a theoretical manifest and a key document in modernist literature and spread widely abroad.

What are the major works of Adolf Loos?