Spatialism is an Art Movement founded by Lucio Fontana, an Italian artist, in Milan (1947). This type of Art synthesizes colour, sound, space, movement, and time.

It, also called spatial movement, was born after World War II , which advocated an art able to reject the naturalistic image and use of light, sound and space. He sets the stage Lucio Fontana , and Italy joined it various artists including R. Crippa , E. Donati , G. Dova .

With Manifiesto Blanco , they began to speak about an art overcome as conceived and stagnant, inputting the dimensions of time and space. While technology opens its horizons , Einstein and Freud marked the psychic upheaval of the first fifty years of the century. Spatialism reconnects Informal but without the negative existentialism of Dubuffet , Wols or Fautrier.

Spatialism represented a union of the fundamentals of science with Fine Arts, using tools, like television and Neon lighting to name a couple. According to ‘Manifesto Blanco‘, Spatialism was conceptualized to “transcend the area of the canvas or the volume of the statue, to assume further dimensions and become an integral part of architecture, transmitted into the surrounding space and using new discoveries in science and technology.”

Artists and the Artworks

Spatialism eventually began focusing on the negative aspects in the depiction of its subjects. Its subsequent manifestos dispelled the tenets of the expression, artificial emotions, and color scheme over geometrical space, rather than capturing the ‘real,’ as it exists.

Fontana’s revolutionary style not only created a niche for him, it became a powerful influence on several artists and art forms. Among the most celebrated artists associated with Spatialism were Roberto Crippa (1921-72), Cesare Peverelli (1922-2000), Gianni Dova (1925-91), and Enrico Donati (1909-2008).

The Spatialists painters have as a priority the coloring or painting the canvas, but they create on it of buildings that show the eyes of the passer, even in purely pictorial field, there is the three-dimensionality. Their intent is “to shape the new energy vibrating in the post-war world, where the awareness of the existence of hidden natural forces such as particles, rays, electrons pressed with uncontrollable force on the “old” surface of the canvas”. 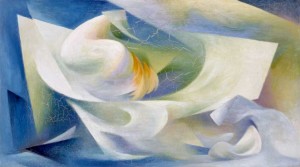 Spatialism Movement was influenced by three art movements, Dadaism, Tachism, and Concrete Art . Dadaism ignored the ‘aesthetics’ in Fine Arts to bring out revolutionary compositions. Tachisme, instead, was often regarded as the French style of Abstract Expressionism. Concrete Art of 1930s was predominated by the interplay of colors and lines for representation. Although, the underlying ideas behind Spatialism and the Abstract Expressionism were similar, Spatialism did away with the preponderance of paint and easel media, as the tools for creating artworks. Instead, it focused on the ‘moment’ represented as a function of time and action.