Frank Lloyd Wright impressively developed his principle of “Organic Architecture” with his 1900 “Prairie Houses”, which were practical examples of unity of natural environment, exterior and interior design. Robie House would go on to be considered among his best works on the subject.

A chair as part of a house

Frank Lloyd Wright designed this high-back chair for the dinnig room of the Frederick C. Robie House, an Hyde Park (Chicago) single family house. The high-back shape of the chairs, arranged around the table, was used to separate the dining area from the rest of the room and create a cozy, intimate feeling of an almost independent area, as was common with furniture used in Prairie (Wright’s unique architectural style, built around the creation of a squisitely American identity and language, of which Robie House is considered among the best examples of) house interiors.  Of note regarding the design, there are not only strikingly high backs, but also gently curved legs, softening the rigor of the geometric design in a more organic shape. 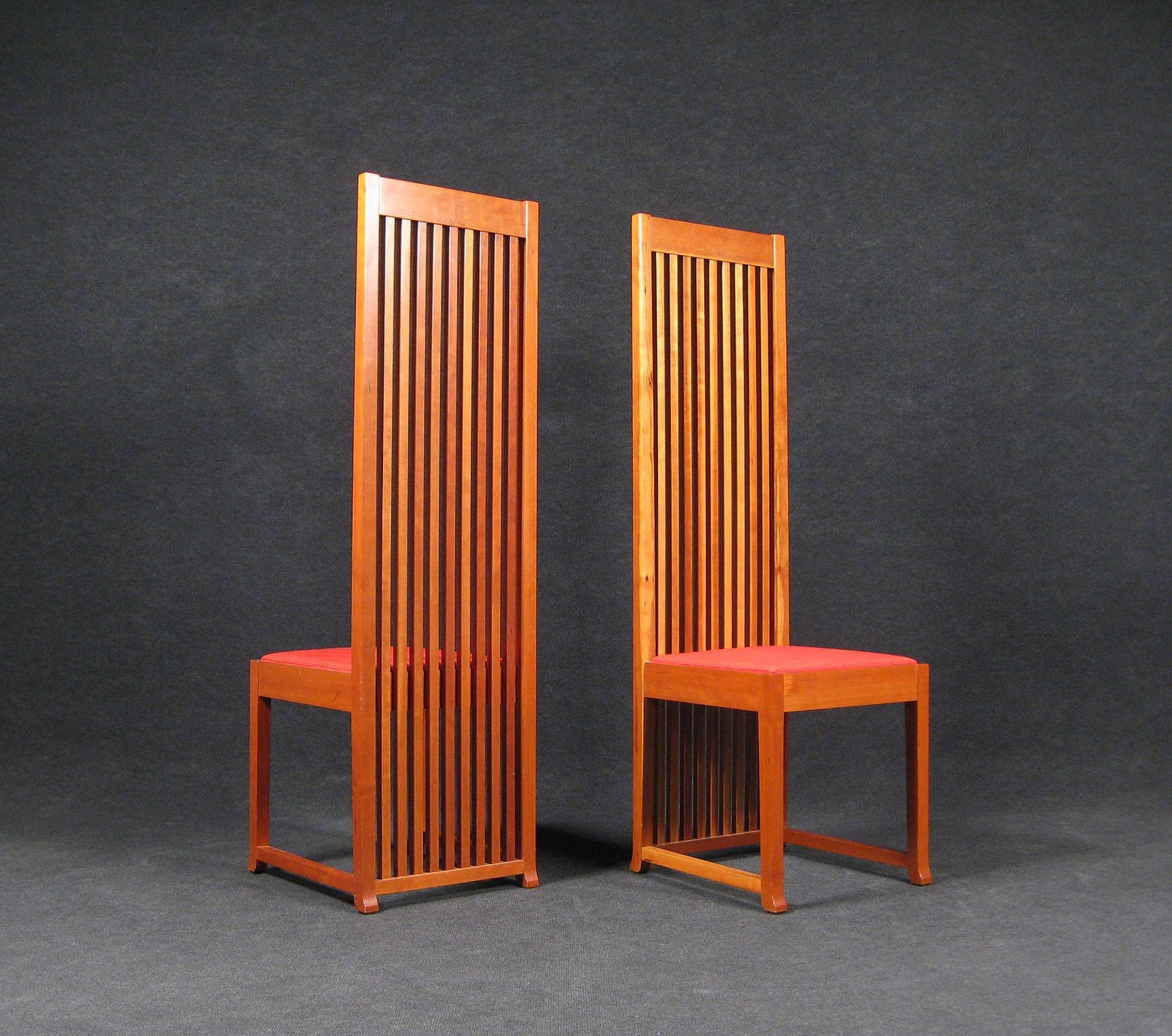 Regarding the hmee the chair was designed for, Frederick C. Robie’s house is located on the University of Chicago campus in the southern Hyde Park neighborhood of Chicago, Illinois. The edifice was built between 1909 and 1910 and is widely known as the greatest example of the Prairie School style and its distinctly American taste. Robie House has been nominated as National Historic Site of the United States.

The so called “Prairie Style” term, regarding Wright’s revolutionary brand of architecture, was coined by critics and historians who have noted that buildings and their various components owe their design influence the landscape and plant life of the prairie of the US Midwest. Like most of Wright’s Prairie houses, he designed not just the house, but all the interiors, windows, lighting, carpets, furniture, and fabrics. As Wright himself wrote in 1910,

It is absolutely impossible to regard a building as one and its furnishings as another… These are all just structural details of its character and completeness.

A total work of art

To further expand, Frank Lloyd Wright’s ideology focused on the complete integration of the house-site and structure, interior and exterior, furniture, ornament and architecture, making sure every element of the project was conceptually connected. He designed the oak furnishings with straight lines and rectilinear shapes in the tradition of the Arts and Crafts, aiming for strength and simplicity.

In the early 1890s, as Wright was working to define his vision for new American architecture, he began designing furniture for his Oak Park house; Between 1890 and 1895, built-in window seats and two sturdy oak armchairs were designed for the living room by English artist and designer William Morris.

For the dining room Wright further integrated furniture and lighting, enriching the former with innovative uses of the latter; Wright embraced electricity from the start of his career, complementing natural lights with incandescent ones. The dining table and eight high back chairs created for the dining room of the home were revolutionary for the time, thanks to its overriding verticality and simplicity, marking a clear step towards a new aesthetic in Wright’s designs. The furniture forms thus an intimate secondary space in the room, the table shielded by the high backs of the dining chairs; the atmosphere is completed by wall sconces of leaded glass, oak, and bronze incorporated materials and motifs, blending space and materials.

Designed by Frank Lloyd Wright in 1908, this chair was re-edited by Cassina in 1986 and included in the “Cassina I Maestri” Collection. 601 Robie 1 chair for Cassina is produced in natural cherrywood, cherrywood stained or black, or in natural canaletto walnut. Seat upholstery is made in polyurethane foam and covered with fabric or leather.