The LCW (also known as Low Chair Wood or Eames Plywood Lounge Chair) is considered an iconic design, dating from the period of Charles and Ray Eames’s early experiments with three-dimensionally molded plywood.

The chair was designed using technology for molding plywood that the Eames developed before and during the Second World War. Before American involvement in the war in 1940, Charles Eames and his friend, architect Eero Saarinen, entered and won a MoMA contest exploring the natural evolution of furniture in response to the rapidly changing world. However, the production of the chairs was postponed due to production difficulties, and then by the United States’ entry into WWII. Saarinen left the project due to frustration with production cycle.

The design of this chair arose from experiments with molding plywood conducted by Charles and Ray Eames during the Second World War. Their research focused primarily on forming plywood in three planes to create softly curving, organic shapes.

They finally succeeded with the Lounge Chair Wood. In fact, they came up with two separate pieces for the seat and backrest of the chair, joined by a plywood spine and supported by plywood legs. The result was a chair with a sleek and honest appearance where all of the connections were visible and the material was not hidden beneath the upholstery. The seat was joined to the spine and legs with a series of four heavy rubber washers with nuts embedded in them, later called “shock mounts”. The shock mounts were glued to the underside of the seat and screwed in through the bottom of the chair. The backrest was also attached using shock mounts while, from the front and top, the seat and back are uninterrupted by fasteners.

A Unique Technology and a Great Flaw

The rubber mounts used for the Eames Lounge Chair Wood were pliable, allowing the backrest to flex and move with the sitter. This unique technology was as innovative as was also one of the chair’s greatest flaws. In fact, the shock mounts are glued to the wooden backrest but may tear free for various reasons. A later response to this problem was to drill directly through the backrest and insert fasteners between the backrest and the lumbar support, but this alteration greatly devalued the chair, since it alters the original aesthetic of smooth, uninterrupted wooden forms.

The Plywood Group and the Future of Eames Design

Even though the plywood chair was a compromise of the Eames’ vision to create a single shell chair it constituted a successful design. Alongside the LCW the Eames created a family of plywood chairs, tables, and folding screens called “The Plywood Group”. The suite success caught the attention of George Nelson, design director of Herman Miller. Nelson convinced D. J. DePree, the owner of Herman Miller, to hire the Eames Office as designers and bring on production of the Eames plywood furniture.

At the time, the Eames design was a striking new way of looking at furniture and furniture design. In North America Herman Miller has continued producing them since 1947 until the present day while in Europe, Vitra became the producers of Eames furniture. They are the only two legitimate companies producing chairs licensed by the Eames estate.

The chair continues to be an icon of modern design. It is retailed around the world and prices for new units continue to rise. In its 1999 millennium edition, Time Magazine hailed the LCW as the greatest design of the 20th century for its comfort as well as its status symbol.

Which are the Materials of the LCW Chair?

The back and seat of the Lounge Chair Wood are in molded plywood with face veneer in ash or walnut. The upholstery is made of a thin foam padding, covered in leather (LCW Leather) or calfskin hide (LCW Calf‘s Skin), whereas the base is realized in molded plywood with the same face veneer as the back and seat. Seat and backrest are attached to the base with shock mounts (bonded rubber and metal connectors).
During the many years of production, Herman Miller has offered the LCW in a variety of wood veneers and upholsteries over the molded maple inner plies, yet the original production models with the original materials are the highest valued by collectors. 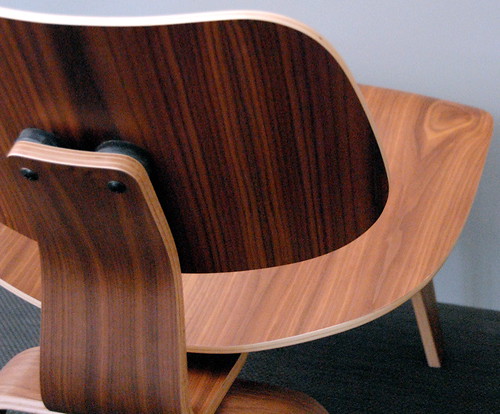