The Wassily Chair, also known as the Model B3 chair, was designed by Marcel Breuer in 1925-1926 while he was the head of the cabinet-making workshop at the Bauhaus, in Dessau, Germany.

“My most extreme work . . . the least artistic, the most logical, the least ‘cozy’ and the most mechanical.” 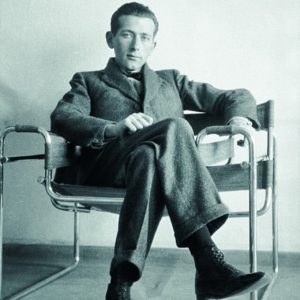 While teaching at the Bauhaus, Breuer often rode a bicycle, a pastime that led him to what is perhaps the single most important innovation in furniture design in the twentieth century: the use of tubular steel. The tubular steel of his bicycle’s handlebars was strong and lightweight, and lent itself to mass-production. Breuer reasoned that if it could be bent into handlebars, it could be bent into furniture forms.

Also Inspired by the constructivist theories of the De Stjil movement, Marcel Breuer was still an apprentice at the Bauhaus when he reduced the classic club chair to its elemental lines and planes, forever changing the course of furniture design.

This chair was revolutionary in the use of the materials (bent tubular steel and eisengarn) and methods of manufacturing. The design (and all subsequent steel tubing furniture) was technologically feasible only because the German steel manufacturer Mannesmann had recently perfected a process for making seamless steel tubing. Previously, steel tubing had a welded seam, which would collapse when the tubing was bent.

The model for this chair is the traditional overstuffed club chair; yet all that remains is its mere outline, an elegant composition traced in gleaming steel. The canvas seat, back, and arms seem to float in space. The body of the sitter does not touch the steel framework.

A Chair Inspired by an Artist

“… Kandinsky, who came by chance to my studio when the first chair was brought in, said, “What’s this?” He was very interested and then the Bauhaus got very interested in it. A year later, I had furnished the whole Bauhaus with this furniture.”

Despite popular belief, the chair was not designed for the non-objective painter Wassily Kandinsky, who was on the Bauhaus faculty at the same time. Kandinsky had admired the completed design, and Breuer fabricated a duplicate for Kandinsky’s personal quarters. The chair became known as “Wassily” decades later, when it was re-released by Italian manufacturer Gavina, who had learned of the anecdotal Kandinsky connection in the course of its research on the chair’s origins.

The model of the chair, designed in 1925, undergoes several transformations over time. In 1927, the frame is constructed of the current version, consisting of a continuous tube (no joints) that circumscribes bending several times a cubic space.

Initially, the Wassily Chair is produced by the company founded by Breuer of Standard-Mobel Lengyel in 1929 that is absorbed by Thonet.

The Thonet produced version of the chair is most rare, and went out of production during World War II.

After the War years, Gavina picked up the license for the Wassily, along with the Breuer designs previously sold by Standard-Möbel, Lengyel & Co., and introduced the more recognized Wassily version that replaced the fabric with black leather straps, though the fabric version was still made available. In 1968 Knoll bought the Gavina Group of Bologna. This brought all of Breuer’s design into the Knoll catalog.

The Wassily chair, like many other designs of the modernist movement, has been mass-produced since the late 1920s, and continuously in production since the 1950s. A design classic is still available today. Though patent designs are expired, the trademark name rights to the design are owned by Knoll of New York City. Reproductions are produced around the world by other manufacturers, who market the product under different names.

Structure: Tubular steel with polished chrome finish.Seat in leather or Cordura.Each chair comes with the feet in molded plastic, easily applicable to the base, if necessary (for hard floors).

Edges of black cowhide leather are dyed black; Frame is seamless tubular steel with a polished chrome finish; Four plastic glides snap into pre-drilled holes on base of the chair.