In 142 AD, during the Han Dynasty, a man named Wei Boyang was the first to write anything about gunpowder. He wrote about a mixture of three powders that would “fly and dance” violently.

Gunpowder is the first explosive to have been developed. Popularly listed as one of the “Four Great Inventions” of China, it was discovered during the late Tang dynasty (9th century) but the earliest record of a written formula appeared in the Song dynasty (11th century).

Although it is not known precisely whom gunpowder was discovered by, most historians agree that gunpowder’s origins were in China due to the amount of archaeological evidence and historical documents that exist predating others by centuries.

The very earliest possible reference to gunpowder appeared in 142 AD during the Eastern Han dynasty when the alchemist Wei Boyang wrote about a substance with the properties of gunpowder. He described a mixture of three powders that would “fly and dance” violently in his Cantong qi, otherwise known as the Book of the Kinship of Three, a Taoist text on the subject of alchemy. Although it is impossible to know if he was actually referring to gunpowder, no other explosive known to scientists is composed of three powders. While it was almost certainly not their intention to create a weapon of war, Taoist alchemists continued to play a major role in gunpowder development due to their experiments with sulfur and saltpeter involved in searching for eternal life and ways to transmute one material into another.

How is gunpowder made?

You made gunpowder by mixing the three powders together, using about fifteen parts of saltpeter to three parts of charcoal and two parts of sulphur. 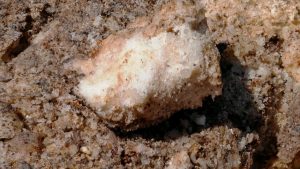 The reason gunpowder explodes is that this mixture burns very fast. When it burns, it releases gases that are bigger in volume than the original powder (just the way steam is bigger than water is).

Initial use of gunpowder

Many western history books over the years have stated that the Chinese used this discovery only for fireworks, but that is not true. Song Dynasty military forces as early as 904 A.D. used gunpowder devices against their primary enemy, the Mongols. These weapons included “flying fire” (fei huo), an arrow with a burning tube of gunpowder attached to the shaft. Flying fire arrows were miniature rockets, which propelled themselves into enemy ranks and inspired terror among both men and horses. It must have seemed like fearsome magic to the first warriors who were confronted with the power of gunpowder.

The spread of gunpowder outside China

By the mid- to late-eleventh century, the Song government had become concerned about gunpowder technology spreading to other countries. The sale of saltpeter to foreigners was banned in 1076. Nonetheless, knowledge of the miraculous substance was carried along the Silk Road to India, the Middle East, and Europe. In 1267, a European writer made reference to gunpowder, and by 1280 the first recipes for the explosive mixture were published in the west. China’s secret was out.

Down through the centuries, Chinese inventions have had a profound effect on human culture. Items like paper, the magnetic compass, and silk have diffused around the world. None of those inventions, however, have had quite the impact that gunpowder has, for good and for bad.