When it became clear in the 1950s that the school library had outgrown its existing building, the board initially hired an architect who proposed a traditional design for the new building. Deciding instead to construct a library with a contemporary design, the school gave the commission to renowned architect Louis I. Kahn in 1965. Construction began in April 1969 and was completed in November 1971. In 1997, the library was officially named the Class of 1945 Library, honouring Dr. Lewis Perry, Exeter’s eighth principal (1914-1946).

The Designing Process and the Choice of a Contemporary Style

Meeting in 1964 and 1965, the Academy committee conferred with numerous architects before recommending Louis I. Kahn as the chosen one for the library, whom they admired “…for his sympathetic use of brick and his concern for natural light.”

Kahn had indeed already thought about the proper design for a library, having earlier submitted proposals for a new library at Washington University. He also expressed a deep reverence for books, describing them as a tremendously important offering.

A Detailed Plan for the New Library

Working with Engelhardt and Leggett, educational consultants from Purdy Station, New York, the building committee carefully considered what they wanted in a new library and presented their ideas to Kahn in an unusually detailed document that went through more than fifty drafts. The early designs included some items that were eventually rejected, such as a roof garden and two exterior towers with stairs that were open to the weather.

Nonetheless, the committee had covered every aspect of the building, from philosophy to practical details, with great emphasis on the atmosphere desired both within and without the building. In addition to outlining functional requirements for the library, the committee specified site and exterior design, design details, staff facilities, spatial relationships, and items such as air conditioning, lighting, electrical and mechanical equipment, and security, fire and water protection.

Overall, the library has an almost cubical shape: each of its four sides is 33 m wide and 24 m tall. Kahn structured the library in three concentric square rings, which he used to call “doughnuts”. The outer ring, which is built of load-bearing brick, includes all four exterior walls and the library carrel desks immediately inside them. The middle ring, which is built of reinforced concrete, holds the heavy book stacks. The inner ring is a dramatic atrium with enormous circular openings in its walls that reveal several floors of book stacks.

In the words of Robert McCarter, author of the book Louis I. Kahn,

[…] from the very beginning of the design process, Kahn conceived of the three types of spaces as if they were three buildings constructed of different materials and of different scales – buildings-within-buildings.

Accordingly to the committee’s suggestion, Kahn made the building’s exterior relatively undramatic, suitable for a small New England town. Its facade is primarily brick with teak wood panels at most windows marking the location of a pair of wooden carrels. The bricks are load-bearing; that is, the weight of the outer portion of the building is carried by the bricks themselves, not by a hidden steel frame. Kahn calls this fact to the viewer’s attention by making the brick piers noticeably thicker at the bottom where they have more weight to bear. The windows are correspondingly wider toward the top where the piers are thinner.

At the top of the exterior walls is a row of openings similar to the windows below except that these openings are above the roof and have no glass.

Two arcades circle the building: one 1.8 m under the row of windows and one on the ground floor. The latter conceals the main entrance to the library, since Kahn disliked the idea of a building that was dominated by its entrance.

The exterior of the library, where it’s possible to see the rows of windows and arcades.

A circular double staircase built from concrete and faced with travertine greets the visitor upon entry into the library. At the top of the stairs the visitor enters a dramatic central hall with enormous circular openings that reveal several floors of book stacks. At the top of the atrium, two massive concrete cross beams diffuse the light entering from the clerestory windows.

Because the stacks are visible from the floor of the central hall, the layout of the library is clear to the visitor at a glance, which was one of the goals the academy’s building committee had set for Kahn. Other specifications of the committee called for a large number of carrels (the library has 210) and for the carrels to be placed near windows so they could receive natural light.

A Clear Selection of Materials

To ensure the new library was in keeping with the rest of the Academy campus, the design documents developed by the faculty committee specified the use of various materials. They include:

Embracing the committee’s specification on the use of traditional Exeter brick, stone, and slate, Kahn also incorporated extensive use of natural wood (primarily teak and white oak), travertine, and concrete, producing a building that is warm, impressive and highly functional.

In 1997 the library received the Twenty-five Year Award from the American Institute of Architects, an award that recognizes architecture of enduring significance that is given to no more than one building per year.

The citation of the award states:

“An outstanding collaboration of design and technology, this icon of cleanly articulated structure is a cultural center and modern architectural masterpiece for the original quadrangle of the renowned Academy. The massive block of dark-red brick reveals a surprising delicacy. It is artistically ahead of its time and will continue to enlighten as a spiritual touchstone of great design for generations of architects.” 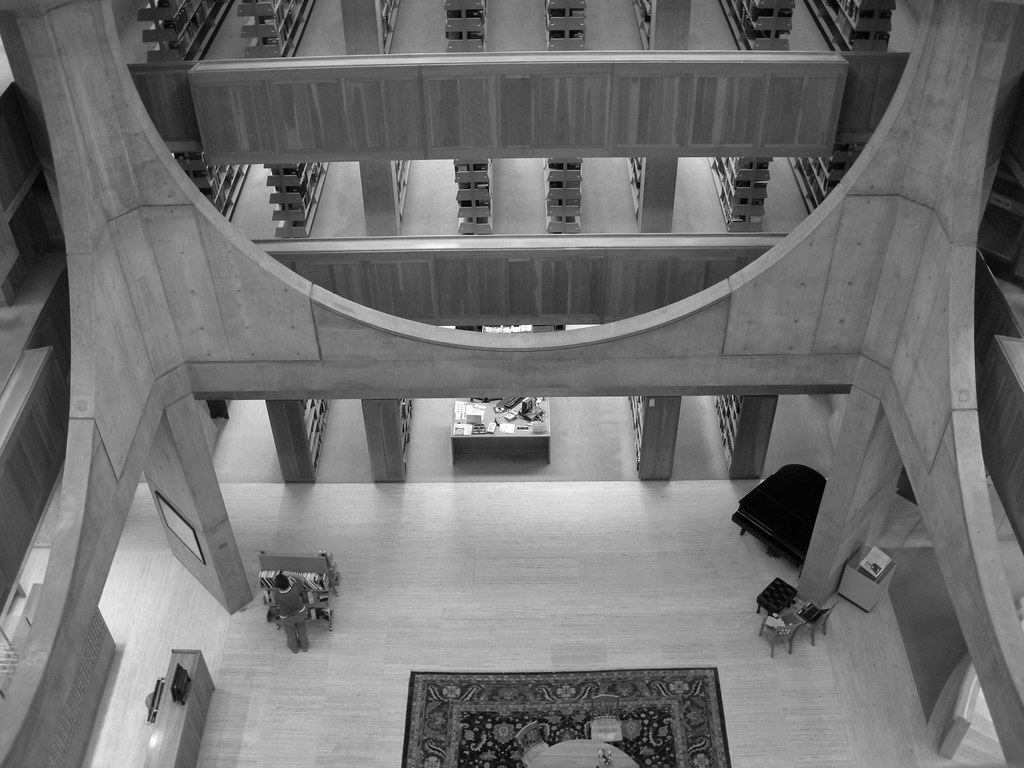