The Austro-Italian designer Ettore Sottsass (1917–2007) is one of the most influential and unconventional figures in twentieth-century design. Architect and Designer, he has participated in all radical movements whether created from the 70s and 80s. 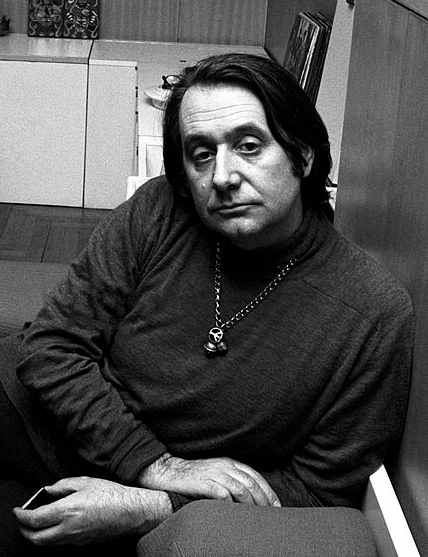 In 1981 he founded the Memphis group, a group that has radically changed the scenario of Italian and world design.
Honored with numerous international awards, was winner of the Golden Compass in 1959.
He designed the first laptop “Valentina” by Olivetti.
He died in 2007 at the age of 90 years.

Ettore Sottsass (1917–2007) was born in Innsbruk in 1907. His father (Ettore Sottsass Senior) was an architect and his mother was Austrian. Having graduated from the Galileo Ferraris high school, he enrolled in the Department of Architecture at the Turin Polytechnic, where he graduated in 1939. Enlisted during the Second World War, he was imprisoned for approximately six years. On finally being released, he returned to Italy in 1947 and began working in Milan – where he met Giuseppe Pagano – first of all with his father and then later opening his own design studio.

In 1958, Sottsass was hired by Adriano Olivetti as a design consultant for Olivetti, to design electronic devices and develop the first Italian mainframe computer, the Elea 9003 for which he was awarded the Compasso d’Oro in 1959. He also designed office equipment, typewriters, and furniture. There Sottsass made his name as a designer who, through colour, form and styling, managed to bring office equipment into the realm of popular culture.

While continuing to design for Olivetti in the 1960s, Sottsass developed a range of objects which were expressions of his personal experiences traveling in the United States and India. These objects included large altar-like ceramic sculptures and his “Superboxes”, radical sculptural gestures presented within a context of consumer product, as conceptual statements. Covered in bold and colorful, simulated custom laminates, they were precursors to Memphis, a movement which came more than a decade later. Around this time, Sottsass said: “I didn’t want to do any more consumerist products, because it was clear that the consumerist attitude was quite dangerous.”As a result, his work from the late 1960s to the 1970s was defined by experimental collaborations with younger designers such as Superstudio and Archizoom Associati, and association with the Radical movement, culminating in the foundation of Memphis at the turn of the decade.

The idea behind the design

Design is one way to discuss life.  It is a way to discuss society, politics, eroticism, food and even design. Lastly, it is a way to build a possible figurative utopia or to build a metaphor of life. Of course, for me, design is not limited to the need to lend more or less form to a stupid product destined for a more or less sophisticated industry; therefore, if you have to teach anything about design, it should be, above all, something about life, and you should stress this point, explaining that technology is a  metaphor for life.

This led to his adherence to the principles of Radical Design. Profoundly disappointed by Italian mass production, which he blamed for provoking the society of consumerism, form the 1990s onwards Sottsass reduced his work as a designer to just a few interventions for art galleries, instead dedicating his work ever increasingly to architecture.

What are Sottsass most famous design?