“If this work seems so threatening, this is because it isn’t simply eccentric or strange, but competent, rigorously argued, and carrying conviction.” Jaques Derrida (1930-2004), French philosopher. 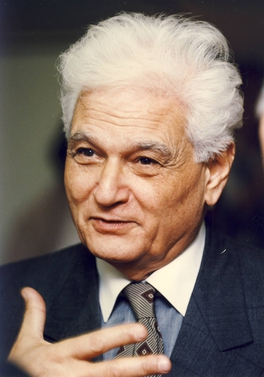 Jacques Derrida, (born July 15, 1930, El Biar, Algeria—died October 8, 2004, Paris, France), French philosopher whose critique of Western philosophy and analyses of the nature of language, writing, and meaning were highly controversial yet immensely influential in much of the intellectual world in the late 20th century.

Derrida‘s name has probably been mentioned more frequently in books, journals, lectures, and common-room conversations during the last 30 years than that of any other living thinker. He generated both adulatory and vituperative journalism; and he wrote some of the most formidably difficult philosophical works of his time. If he is remembered in future centuries, it is likely to be for contributions to our understanding of language, meaning, identity, ethical decisions and aesthetic values.

The term ‘Deconstruction’ is first coined and developed by the French philosopher Jacques Derrida. It has at least two aspects: literary and philosophical. The literary aspect concerns the textual interpretation, where invention is essential to finding hidden alternative meanings in the text. The philosophical aspect concerns the main target of deconstruction: the “metaphysics of presence,” or simply metaphysics.

Deconstructivism, or Deconstruction architecture, is an approach to building design that appeared in the early 1970s. The main aim of this approach is to create architecture, which can be seen in irrational and different way.

Deconstructivist buildings may seem to have no visual logic by its dismantled basic architectural elements, although they satisfy their intended functions and this present an unprecedented challenge to the traditional architectural conventions. However, the main objective of Deconstructivist architects is to move architecture away from the rationality and the dominant principles of modern architecture.

Architects whose work is often described as deconstructionism include: