One of Le Corbusier’s masterpieces, Villa Savoye acts as a modern take on a French country house, one that celebrated the then incoming age of the machines.

The house that single handedly transformed Le Corbusier’s career and enstablished the principles of the International Style: regarded by many as one of the highest points in the Modernist body of work, Villa Savoye sets a new precedent for the history of architecture. The edifice’s detachment from its physical context lends its design to be easily integrated into the mechanistic/industrial context of the early 20th century, conceptually defining the house as a mechanized entity.

The house and the machine

The house should be a machine for living in.

is perfectly incapsulated within the forms, layout, materials, and siting of Villa Savoye.

Located just outside Paris, Villa Savoye offered an escape from the crowded city for its wealthy patrons. Its location on a large site with little to no restrictions allowed Le Corbusier ro exercise total creative freedom.

Le Corbusier had been developing his theories on modern architecture throughout the previous decade; by 1920, he founded the magazine L’Esprit Nouveau, and many of the essays he published there would eventually come to be incorporated into his own, distinguished collection, “Vers une architecture” (“Towards an Architecture“) in 1923. The book celebrated science, technology, and reason, arguing that modern machines could create highly precise designs, not unlike the ideal platonic forms valued by the ancient Greeks. Le Corbusier spared no praise on the totems of modernity—race cars, airplanes, and factories—and marveling at the beauty of their efficiency. As a result, he sought to isolate what he called “type forms”, the universal elements of design that working together form a system, a concept he found applied in a variety of fieldsm such as architecture and engineering, across time and troughout the world.

Villa Savoye’s essential geometric volumes embody such concept, and its careful consideration of procession and proportion connect the building to Classical ideals. At the same time, its clean simplicity and use of concrete evoke the precisely-calibrated works of engineering – so admired by the architect. Villa Savoye represents Le Corbusier’s interpretation of the very nature of architecture, his attempt to express a timeless classicism through the language of architectural modernism.

The five points of architecture

An enormous influence over Modernis and architecture as a whole, Villa Savoye was designed to adress his philosophy of the “Five Points”, the basic tenets of his new architectural standard:

Lower level: Upon entering the site, the house appears to be floating above the foreste background, supported by slender pilotis that seem to dissolve among the tree line, due to green color of thebase enhancing the perception of a floating volume. The lower level acts as the maintenance and service programs of the house; one of it most curious aspects is the curved glass façade on the lower level, formed to match the turning radius of automobiles of 1929, so that when the owner drives underneath the larger volume they can pull into the garage with the ease of a slight turn.

Living level: the upper volume, fitted with ribbon windows that blend seamlessly into the stark, white façade, voiding it of any hierarchy. The windows play with the perception of interior and exterior, which does not fully become expressed until once inside: once there, an understanding of the spatial interplay between public and private spaces becomes clear.  Typically, the living spaces of a house are relatively private, closed off, and rather secluded; yet, Le Corbusier situates the living spaces around a communal, outdoor terrace that is separated from the living area by a sliding glass wall. Both the lower level and the upper living quarters are based off an open plan idea that encourages the inhabitants to continuously meander between spaces.

Terrace: Le Corbusier treated the terrace as its own room without walls, reflecting his desire to fully integrate landscape and architecture. Madame Savoye, much like him, believed in the benefits of fresh air and sunshine, and considered leisure time spent outdoors one mark of a modern lifestyle. Villa Savoye’s integration of indoor and outdoor spaces allowed the family to spend time outdoors in the most efficient way possible. 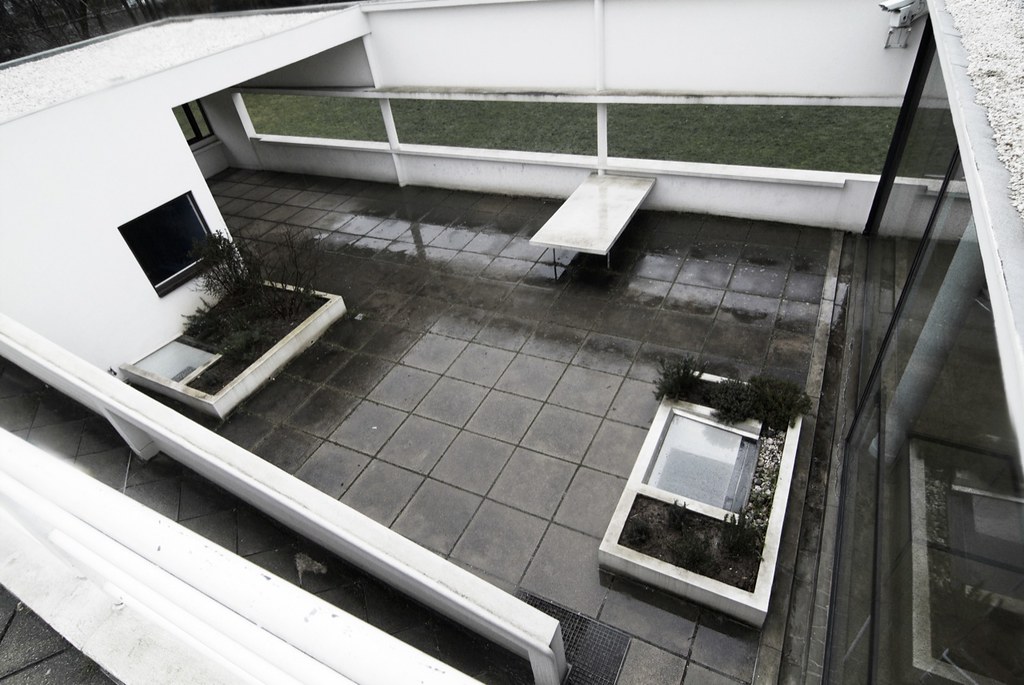 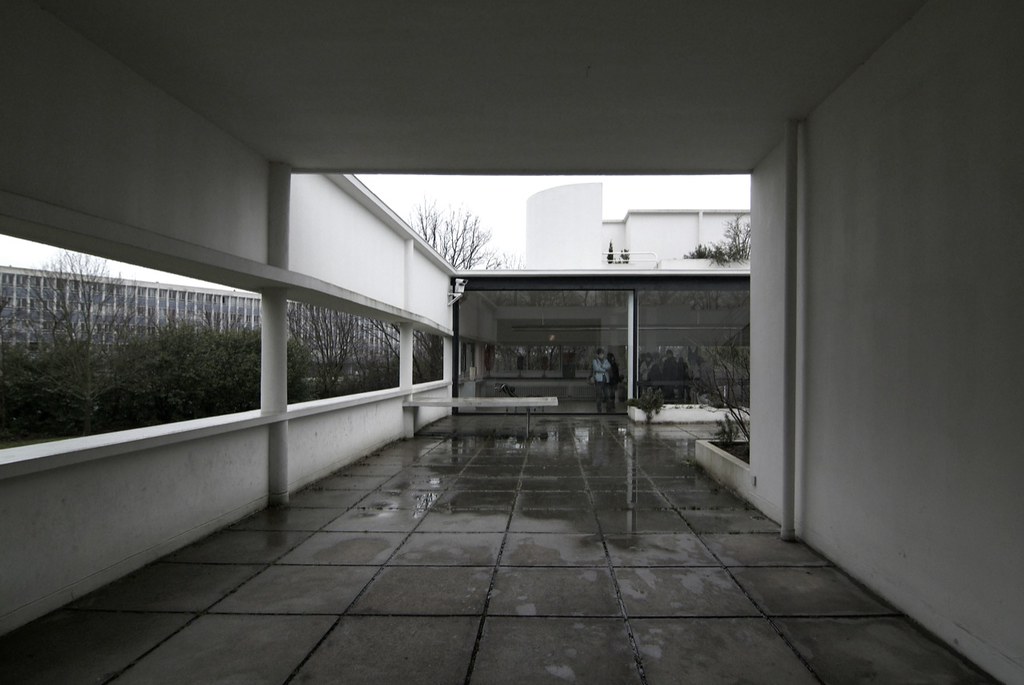