A house’s daring construction over a waterfall was instrumental in reviving Wright’s architecture career, becoming one of the most famous 20th-century buildings in the process.

Fallingwater, a weekend residence built near Mill Run, southwestern Pennsylvania, was designed by American architect Frank Lloyd Wright for the Kaufmann family in 1935 and completed in 1937.

Today, Frank Lloyd Wright (1867-1959) is revered as one of history’s greatest architects—but by the time he reached his late 60s, many critics considered him to be washed up. Wright had only built a few of his projects in the previous decade, the Great Depression had diminished demand for new buildings, and, adding insult to injury, his younger peers considered his style to be anachronistic. Kaufmann—whose department store, Kaufmann’s, was later incorporated into Macy’s—helped resuscitate Wright’s career when he asked the architect to design a weekend home in the Laurel Highlands for his family.

The waterfall had been the family refuge for fifteen years and Wright was commissioned to design the house facing the waterfall so that it could be seen. Wright’s proposal was instead to integrate the design of the house with the waterfall itself, placing it above it making it part of the life of the Kaufmanns, who adored this radical proposal to suspend the house above the waterfall.

However, Edgar Kaufmann Sr., a pragmatic businessman, sent a copy of Wright’s plans to his engineer; who found the ground unstable and did not advise him to proceed with the house. Wright was displeased with this lack of confidence but agreed to increase the number and diameter of the structure’s steel reinforcements, Kaufmann agreed to proceed. It should be noted that the engineer’s warnings later proved valid, a problem that “haunted” Wright for the rest of his life.

Edgar Kaufmann Jr. pointed out that Wright’s famous concept of “Organic Architecture” stems from his Transcendental background. The belief that human life is part of nature. Wright even incorporated a rock outcrop that protruded above the living room floor into his huge central hearth, further joining the house with the earth.

Can you say, when your building is complete, that the landscape is more beautiful than before? 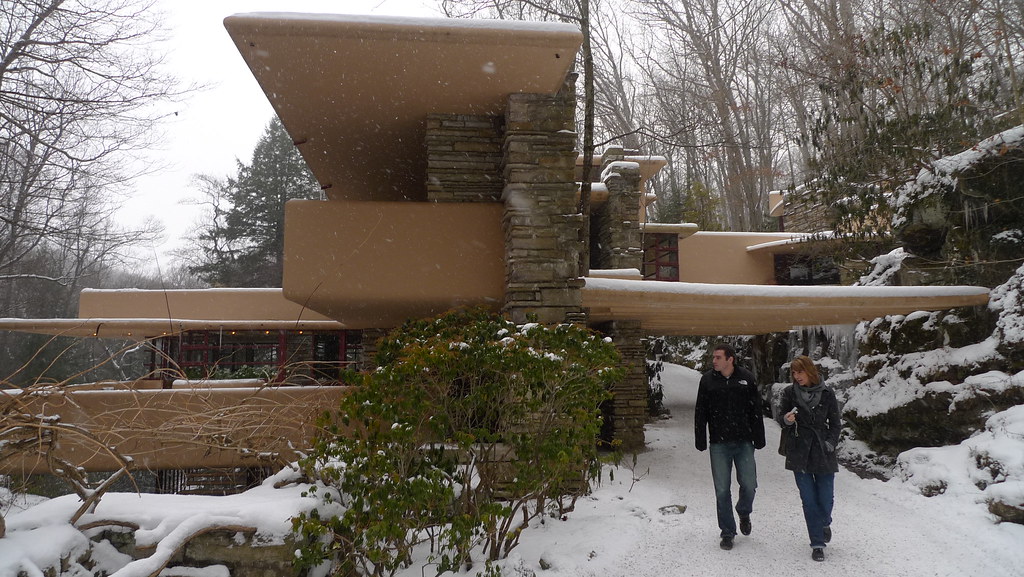 Wright further emphasizes the connection with nature through the liberal use of glass; the house has no walls facing the falls, only a central stone core for the fireplaces and stone columns. This provides elongated panoramas that lead the gaze to the horizon and the woods.

An image of Modern man taken by change and constant flux, clinging…to everything that seems solid but no longer considers himself the center of the world.

The architect’s creative use of “corner windows” makes corners disappear. Wright even bows to nature by bending a lattice beam to accommodate a pre-existing tree.

The house took on “a definite masonry form” that related to the place, and a reinforced concrete structure was decided on for the terraces. It was Wright’s first time working with concrete for residences and despite little initial interest in the material, it nevertheless had the flexibility to be cast into any shape, and when reinforced with steel acquired extraordinary tensile strength.

Fallingwater’s exterior imposes a strong horizontal pattern with bricks and long terraces. Even the windows in the facade have a particular condition where they open at the corners, breaking the box of the house and opening it to the vast outside.

Wright wanted the interior of Fallingwater to look like the surrounding forest. The walls and floors of the 5300-square foot home are constructed of local sandstone; a spur of rock is incorporated into the hearth of the living room; each room has its terrace and its cornerless windows open outwards so that the window panes do not interrupt the view of visitors. There is also a glass hatch in the main level floor that opens to reveal a staircase leading to the stream below.

Fallingwater through the years

Fallingwater has shown signs of deterioration over the past 80 years, largely due to its exposure to moisture and sunlight. Southwestern Pennsylvania’s severe freeze-thaw conditions and water seepage also affect structural materials. Due to these conditions, thorough cleaning of the external stone walls is periodically carried out. Various areas of the house are repainted as needed as part of the continuous care of the masonry. 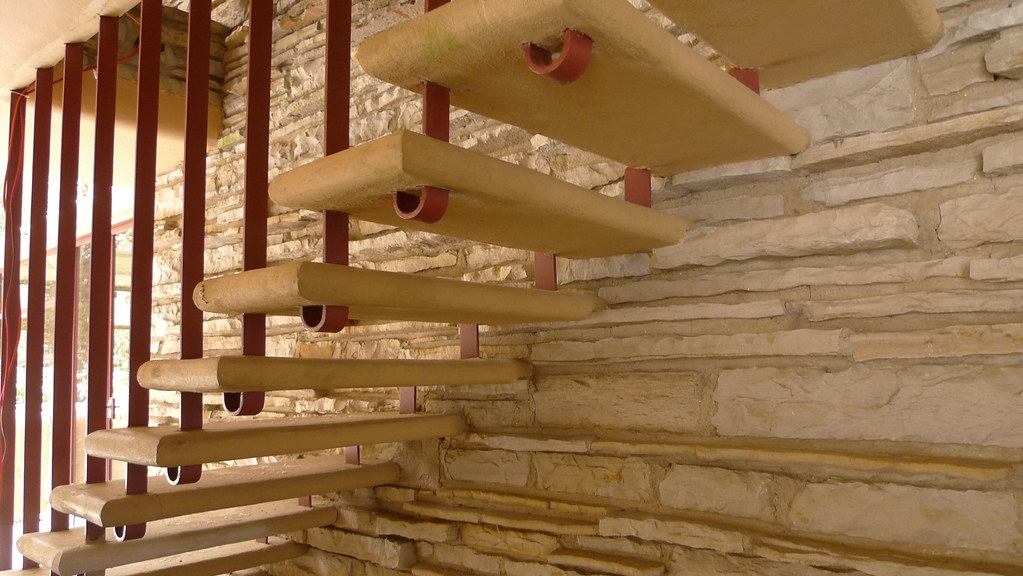 In 1995, the Western Pennsylvania Conservancy commissioned a Fallingwater structural integrity study. Structural engineers analyzed the cantilever motion over time and conducted radar studies of the cantilevers to identify and quantify the reinforcement. These proved that the contractor had indeed added reinforcement to Wright’s plan; however, the cantilevers were still insufficiently reinforced. An architecture firm was hired to solve the problem. Both the concrete and its steel reinforcement were close to their failure limits. As a result, in 1997, temporary beams were installed under the cantilevers to support their weight. In 2002, the structure was permanently repaired by post-tensioning.