Tin is a highly workable metal that was once as valuable as silver for jewellery, coins, and particular dishware. Today it is used in sheets for building and roof construction, soldering or joining metal parts, storage containers, and in alloys like Bronze and Babbitt metal.

Tin (Sn) is a relatively soft and ductile metal with a silvery-white color. It has a 7.29 grams per cubic centimeter density, a 231.88 °C (449.38 °F) low melting point, and a 2,625 °C (4,757 °F) high boiling point. Tin is allotropic: it takes on more than one form. The general form is white tin, or beta tin, which presents a body-centered tetragonal crystal structure. The second allotrope, grey or alpha tin, possesses a face-centered cubic structure. Tin finds industrial application both as a metal and in chemical compounds. As a metal, it is employed in a wide variety of industrial applications, almost always in combination with other elements as an alloy or coating, since its intrinsic softness precludes its use as a structural material. Although tin is usually a minor constituent in alloys, it is an essential one due to its special properties confer improvements to the matrix metal.

The major tin commercial applications are tinplate, solder alloys, bearing metals, tin and alloy coatings (both plated and hot-coated), pewter, bronzes, and fusible alloys. In its chemical reactions, tin is found in two valence states (II and IV) and is amphoteric (capable of reacting as both acid and base). Also, it can link directly with carbon to form organometallic compounds. These properties have given rise to many important uses for tin chemicals; for example, in electroplating, agricultural and pharmaceutical products, plastics, and ceramics.

When and where was tin discovered?

Tin, its alloys, and its compounds have been known to humans for thousands of years. In the Bible can be found several references to the element. Tin was known to other civilizations also. For example, the holy Hindu book Rig Veda, composed around 1000 B.C., mentions tin and other metals.

Bronze, a tin alloy, was created even earlier the pure metal. The mixture has properties that are different from any of the metals alone. The Egyptians, Mesopotamians, Babylonians, and Peruvians were making bronze approximately in 2000 B.C. Probably, when copper and tin compounds were heated together, the alloy was discovered accidentally.

Before the discovery of bronze, a lot of metal objects were made out of copper. But copper is soft and bends easily. The bronze is a much better replacement for tools, eating utensils, and weapons. Bronze marked significant progress in human civilization. This alloy advanced transportation methods, food making, and quality of life during the Bronze Age (4000—3000 B.C. ).

The origin of the name Tin is unknown. Some scholars believe that it originates from the Etruscan god Tinia. During the Middle Ages, tin was called by its Latin name, Stannum. From this name derives the element symbol, Sn.

Beyond bronze, the most important tin contribution to humankind was probably the humble tin can. The can has its origins in the perennial problem of how to feed an on-the-move army. Napoleon Bonaparte offered a reward in 1795 to anyone who could find out how to preserve food for military use. In 1810, Nicolas Appert, a French chef, won the 12,000-franc prize with his invention of canning: the process of sealing food or drink in a jar or bottle with the use of boiling water.

This discovery opened the way for the tin can invention just a year later. In 1810, British salesman Peter Durand got a license for using tinplated steel to can food.

The tin can appeared in America in 1818, and Thomas Kensett & Co, a manufacturing company, patented the tin can in 1825. The Civil War helped the increased fame of the tin can, as generals once again searched for a way to feed their soldiers.

One of the tin’s most interesting properties is its tendency to give off a strange screeching noise when it is bent. This sound is sometimes known as “tin cry”. It does not rust, corrode, or react at room temperature neither with oxygen or water. One of its major uses: as a coating protector of other metals. At higher temperatures, the metal reacts with both water (as steam) and oxygen to produce tin oxide.

Similarly, tin is attacked only slowly by dilute acids such as hydrochloric acid (HCl) and sulfuric acid (H 2 SO 4 ). Dilute acids are mixtures that contain small amounts of acid dissolved in large amounts of water. This property also makes tin a good protective covering. It does not react with acids as rapidly as do many other kinds of metals, such as iron, and can be used, therefore, as a covering for those metals.

In concentrated acids, tin dissolves easily, like in hot alkaline solutions, such as hot, concentrated potassium hydroxide (KOH). The metal also reacts with the halogens to form aggregates such as tin chloride and tin bromide. It also forms compositions with sulfur, selenium, and tellurium. 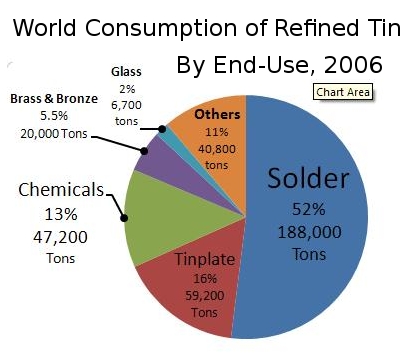 what are the various stages of metal processing?

The tin extracting process depends on the ore deposit source and the impurity amount found in the ore. The Bolivian and English tin deposits are located deep underground and require using tunnels to reach the ore. In these deposits, the mineral may contain about 0.8-1.0% tin by weight. Malaysian, Indonesian, and Thai tin deposits are located in the gravel along streambeds and require dredges or pumps to reach the ore. The mineral in these deposits may contain as little as 0.015% tin by weight. Over 80% of the world’s tin is found in these low-grade gravel deposits.

Despite the source, each process consists of many steps during which the unwanted elements are physically or chemically removed, and also the amount of tin is progressively increased. A number of these actions are conducted at the mine site, while others are managed at separate facilities.

How is it used today?

Tin is employed in the production of other alloys. Bronze, for example, is a tin and copper alloy. It is used in many industrial products, such as spark-resistant tools, springs, wires, electrical devices, water gauges, and valves.

One employment of tin was the manufacture of “tin foil”, a very thin sheet of tin used to wrap products. The tin protected the products from spoiling by exposure to air. Today, most tin foil is thin sheets of aluminum because aluminum is less expensive.

A very important application of tin is tinplating: the process by which a thin coat of tin is placed on the surface of steel, iron, or another metal as a protective layer. Perhaps the best-known example of tin plating is in the production of food cans. Tin cans are made of steel and are covered with a thin layer of tin. Today, most food and beverage cans are made out of aluminum.

In the United States, the largest quantity of tin used goes to the production of solder. Solder is a combination of tin and lead, with a low melting point. Its employment is in connecting two metals. For example, metal wires are attached to electrical devices through solder. Solder is also used by plumbers, to seal the joint between two metal pipes.